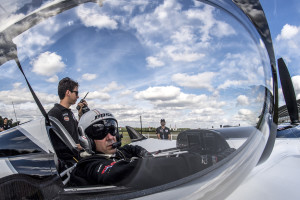 On 3–4 September, the Red Bull Air Race will make a highly anticipated return to the EuroSpeedway Lausitz in Germany. The stop at the oval formerly known as the Lausitzring will be the last chance for American pilots Kirby Chambliss and Michael Goulian to prepare for the highlight of their season: two home stops in the USA.

Michael Goulian, Team Goulian
Team Goulian flies into the EuroSpeedway Lausitz fresh off their best result of the season so far, an appearance in the Final 4 at the mid-August stop in Ascot, UK. Despite delivering top-notch times in Free Practice and Qualifying across the season, things hadn’t always gelled on Race Day, and Goulian’s consistent performances round after round for that fourth-place finish in Ascot was exactly the boost the team needed.

Now they think they can do even more, as technician Warren Cilliers is hard at work with an engine tune-up to address some horsepower loss that he and the team diagnosed at Ascot. Meanwhile, Goulian has stayed G fit by participating in an air show at his hometown of Plymouth, Massachusetts, and he has also been hitting the road with extensive outdoor training on a bicycle.

“For Ascot, the aim was to fly consistent times and remain as fast during the race as we would be in Free Practice. I accomplished that goal, and we were rewarded with a trip to the Final 4,” says Goulian. “With confidence, we enter the German race looking to attack again.”

Kirby Chambliss, Team Chambliss
Coming into the famed motorsport oval of the EuroSpeedway Lausitz, Arizona-based Team Chambliss is hot on the hunt for the world championship podium. With only three races to go – two of which will be in home skies at Indianapolis and Las Vegas – they’re in fourth place overall, less than seven points behind Australia’s Matt Hall in third.

A sharp competitor who has won two titles since he started his Red Bull Air Race career in 2003, Chambliss knows how to handle late-season pressure. Rather than getting rattled by a ninth-place finish at August’s stop in Ascot, he and the team set to work analyzing why their raceplane was underperforming and found the answer: the fuel mixture was too “lean,” costing them time. Now that they know what to remedy, they’re raring to go for Lausitz.

“We’re looking forward to it,” declares Chambliss, who finished sixth at the EuroSpeedway in 2010. “The last time we were in Lausitz, our racetrack was completely different. It will feel like a whole new venue this go-around!”

In the Red Bull Air Race, which is the official world championship of the Fédération Aéronautique Internationale (FAI), the world’s top pilots hit speeds of 370kmh while enduring forces of up to 10G as they navigate a low-level slalom track marked by 25-meter-high, air-filled pylons. It’s the ultimate motorsport series in the sky.

Feel the speed! The action kicks off (redbullairrace.com/live) at the EuroSpeedway Lausitz with Qualifying on Saturday, 3 September, followed by Race Day on Sunday, 4 September 2016.